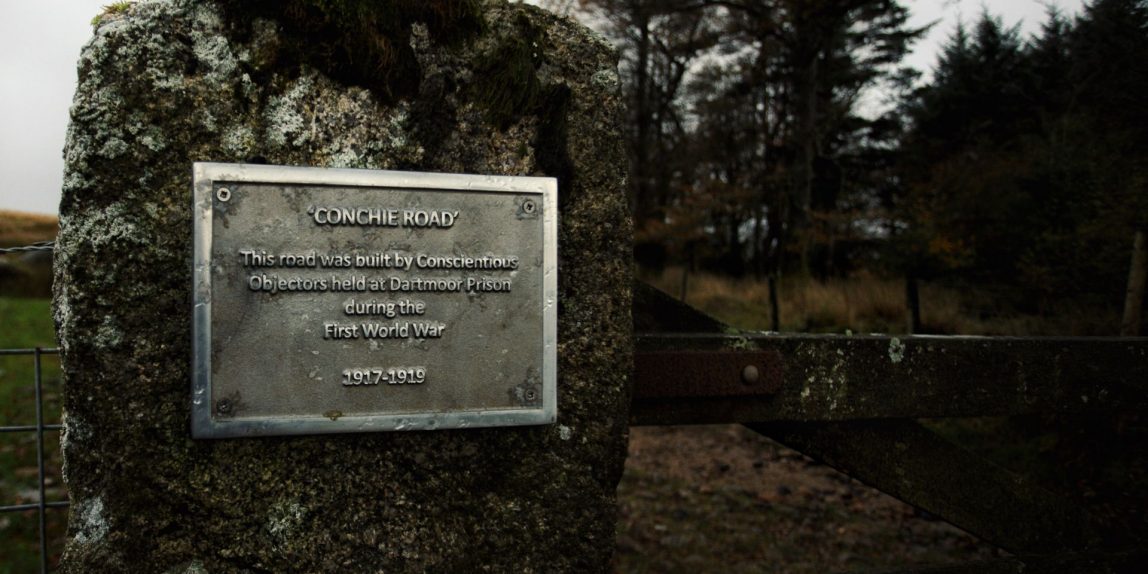 Conchie – a pejorative term for those who, for moral or religious reasons, refuse to participate in armed conflict.

More than a path, but not quite a road, the “Conchie road” starts just beyond the original home of the Duchy of Cornwall’s land agent in Princetown. It cuts a straight line across the open moorland towards Hexworthy without ever quite reaching it. On a summer’s day it would be an easy amble, not much of a walk. But on a wet and stormy morning in winter it’s a desolate, half-remembered memorial to mistreatment, exploitation and exclusion.

I’d come to it because a friend asked me to go and have a look for some research she was doing. I’d heard of it but, to be honest, had no intention of walking it. So when, in late November, I started up the slight incline just beyond Royal Tor, with blustery showers making photography problematic and an icy wind cutting across the moor and through my bones, I was fed up. It already felt like failure.

The road came into existence in 1917. After military conscription was introduced in 1916 provision was made for those who by dint of “freedom of thought, conscience and/or religion” were to be excused from participating in military conflict. Soon after the prison at Dartmoor was rebranded as “Princetown Work Centre” and, in the remaining years of the war, over 1000 Conscientious Objectors were sent and housed there. Locks were removed from the cells, they were free to walk about the town but, the prison, though not a prison, was still filthy, very damp and cold and crucially, they were put to work. They were expected to carry out 10 hours a day hard, manual labour, with a 6.5 hour day on Saturday.

The great majority of this work was not for their benefit, nor the inhabitants of Princetown but for the Duchy of Cornwall. Farmland improvements were undertaken, stone clearance, drainage and the like which then allowed the Duchy to lease out the newly improved land to tenant farmers. I assume, being no expert in agricultural economics, that this is why the “Conchie road” was built. It’s hard to see any other purpose for it. A road to Hexworthy, only slightly more circuitous, already existed but this “road” cuts straight across open moorland that might have been considered appropriate for improvement.

“Conchies” were not well regarded. Princetown was fairly open in its hostility to a group of men who it regarded as cowards. In one instance the coffin of a Conscientious Objector was stoned by angry townsfolk as it moved through the town.

But, as I trudged and tried to keep lenses dry, I imagined what it would have been like to come out here in 1917, under-fed and poorly clothed and, for 10 hours, haul and break rocks, level and grade the heavy earth. How utterly miserable would that have been ? Then to return to a (barely) converted prison, situated in a town that despised you so much. All because your conscience, your moral code, would not allow you to kill your fellow man.

I’d like to think it would be different now; that there would be some respect, some better understanding of why some people are willing to stand up against the society in which they live and say “no” but I’m pessimistic as to whether this would be the case.

The fact that the path is still referred to as “The Conchie Road” today, over a hundred years after its construction, still points to prejudice.