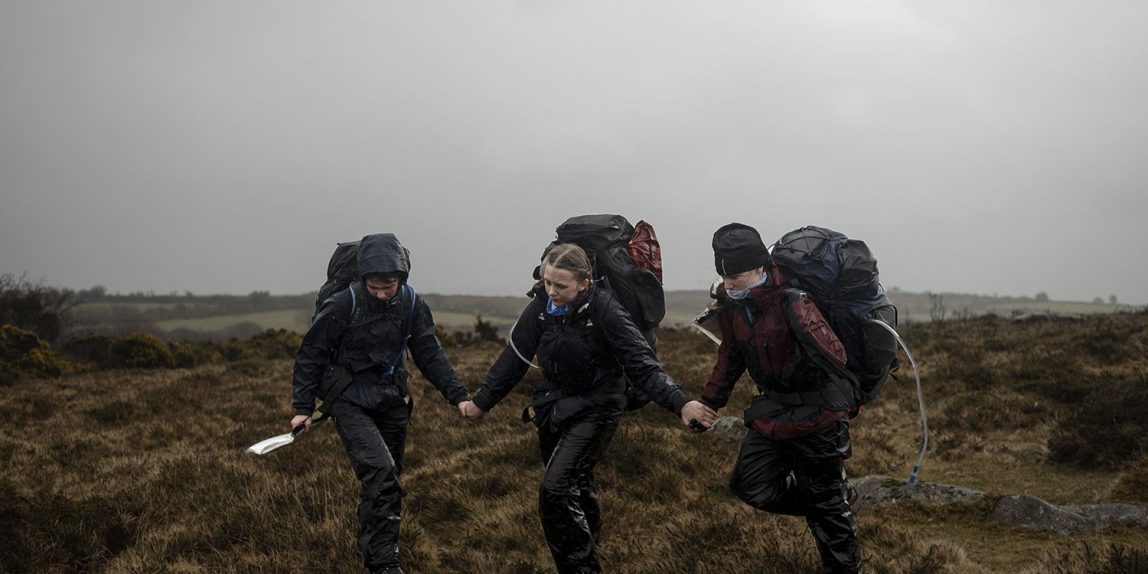 Robert Darch is a British artist-photographer based in the south west of England. Many of you will know his work via his first publication, The Moor, which depicts a fictionalised dystopian future situated on the bleak landscapes of Dartmoor. His Instagram feed showcases the range of his work and his versatility.

He is currently working on his second book which will be based around his series Vale.

The Dartmoor Collective’s Stephen Peart spoke to Robert about the influence of Dartmoor on his work..

SP – You wrote, when 12, that Dartmoor “was a cold and lonely place”. Has your view of the Moor evolved and developed since then?

RD- Not really, but I find that view appealing, it’s not a criticism! I am very lucky to live so close to the only real open wilderness area in the South West of England (Bodmin has far too many fences and Exmoor lacks the emptiness of Dartmoor). Dartmoor also has a specific presence and a distinctive character that is unique. Arthur Conan Doyle put it far more eloquently than me in The Hound of the Baskervilles:

“The longer one stays here the more does the spirit of the moor sink into one’s soul, its vastness, and also its grim charm”.

SP – Dartmoor is an ever-changing environment, especially the weather. How much can you plan ahead for a shoot on Dartmoor and to what extent do you have to adapt to what the Moor is offering on any given day?

RD – It’s hard to plan for Dartmoor. In the case of The Moor it was important that the photographs were always taken in overcast, foggy or wintery weather.

I was drawing on that classic literary representation of Dartmoor as a dark and foreboding landscape. I photographed The Moor over winter when Dartmoor is often cloaked in cloud and rain. It feels like a completely different place in the summer under blue skies.

If the weather wasn’t right I just cancelled or rearranged shoots for The Moor. I am drawn to the same conditions when photographing the Ten Tors training and as this happens predominately over the winter, Dartmoor usually doesn’t disappoint. Last year we were out in gale force winds and driving rain, the teenagers had to hold hands to stay standing at times.

SP – In your early 30s you decided to go back to full time education and study for a Masters in Fine Art. What prompted that decision and what do you feel it has bought to your work that otherwise would not be there?

RD – I was 34 years old when I returned to education, studying for a Masters in Photography & the Book and then an MFA at Plymouth University. It was during this period that I really created and developed my practice. However it’s slightly more complicated than saying it started then as if in a vacuum, as everything that preceded this return to education inherently informed the work I am making now. From my formative childhood experiences in the Midlands exploring the surrounding countryside, to the knowledge and history I gained from the documentary photography degree I studied in Newport years earlier and a long period of ill health I suffered, all influenced the work I am now making.

I moved to Exeter in 2010 and soon discovered I was living around the corner from Jem Southam, a renowned landscape photographer whose work I had always admired. A year later I met my current partner Jessica (https://jessicalennan.com/), who was studying with Jem on the Masters at Plymouth.

I would occasionally attend some of their sessions and most of the visiting lectures in Plymouth. Both Jessica and Jem suggested I should do the Masters. I didn’t have an artistic practice at that point, I was doing some commercial photography work, but mainly filming and making documentaries for arts organisations. Psychologically I was reticent about returning to education and reigniting those aspirations I had at Newport before I became ill, but I really wanted to start working on projects again and doing the Masters allowed me the time and opportunity to experiment and create a practice.

SP – In 2018 you published, to much critical acclaim and success, your first photo book, The Moor. You are hoping to publish your second book next year. What is the subject matter this time, how can people stay informed as to its progress, and what is it about photobooks that you feel make them a good vehicle for disseminating your work?

RD – Thanks, that’s very kind, it was a really rewarding experience publishing The Moor with Another Place Press. However for my second book I am planning on self-publishing, most likely doing a Kickstarter to help fund the printing costs. I made this decision as I would like to take more control over the design and layout. It feels like the right option, artistically and financially. My second book will be my series Vale that I made around the same time as The Moor, it’s perhaps the most personal project I’ve made.

Vale slowly developed over the course of a few years from an initial interest in the landscape outside of Exeter (where I live). However I soon realised the work I was making was far more layered and it was really a cathartic exploration of the lost years I experienced in my 20s.

I suffered a minor stroke at 21, then Glandular Fever and a diagnosis of Chronic Fatigue Syndrome. Whilst I was ill, I would get lost in daydream, fiction and create imaginary worlds to temper the isolation and sadness I felt. This dreamlike imagery became integral to the atmosphere and aesthetic of Vale. The work didn’t offer any particular reconciliation, instead it allowed me to quietly contemplate that time of my life and explore the hopes, dreams and aspirations I had as a younger man. Vale is a romanticised imagining of those lost summers.

The Photobook is the most appropriate medium for presenting my work. It’s intimate and personal and also allows the space to fully realise the narratives I create. I am building a mailing list to promote future book publications. So people can sign up if they’re interested at: https://www.robertdarch.com/subscribe.

SP – One of the things that I particularly enjoy about your imagery is that you blur the distinction between landscape and portraiture, people who appear in your images are firmly grounded within the landscape, and the landscape is not merely a backdrop against which they stand. Indeed in The Moor and in your Ten Tors series it seems to me that Dartmoor is as much of a character within the image as any of the people. Is this connectivity important to you?

RD – Yes, that connection between the people I photograph and the landscape they inhabit is integral to the work I make. My projects generally develop from an initial interest in a specific place or landscape.

I always spend some time exploring, taking photographs and thinking to allow ideas to develop. It’s really important that I have an emotional response or feel a connection with a place before I can start thinking about working in that environment. I also don’t try and limit myself in terms of how the series can evolve; it could be a documentary project, a constructed series or a mixture of both. The constant is always the landscape and how people use and inhabit that space.

In regards to Dartmoor, yes it definitely has a unique character which is integral to the sense of place I created within The Moor. For both The Moor and the Ten Tors work, I am interested in capturing how the people respond to the landscape. It’s this emotional engagement that fascinates me.

In terms of bringing people into the landscape, it’s important for me that they feel like they belong within that environment. For a series like Durlescombe that isn’t so hard as it is essentially a documentary project, and I am photographing people already in their natural environments. Whereas for my series The Moor, I chose all the people I photographed and put them in specific locations and situations.

In these instances more attention has to be paid to how the people look and dress so that it feels like they belong in that space. I don’t particularly like photographing models or actors as they always try and give you something, a pose or a performance, so instead I just ask people I know, have met briefly or are friends of friends. Although the contextual situation of The Moor is fictional it was important that I worked with people that had some pre-existing relationship with Dartmoor. Or that their personalities and lives offered something that complimented my constructed narrative for the project, these choices are always instinctive.

SP – You established and run a collective called Macula, that focus on young photographers aged between 16-21, which you have described as being the most fulfilling thing you have done. You’ve also worked with youngsters in the Ten Tors series. Finally you lecture at Plymouth and Bath Spa universities. What do you think you learn from this contact with younger people?

RD – Sadly Macula doesn’t exist anymore, after seven years I felt it was time to stop running the collective. It was the most fulfilling thing I have done and I still keep in touch with a lot of the members, some are even approaching their mid-20 now!

I am still working with one of the members though, Tavis Amosford, essentially as his assistant and chauffeur! He’s making some really interesting work and completely dedicated and passionate, so I really want to support that. Teaching was the natural next step. I enjoy working with young people and supporting their development as photographers and artists. What do I learn…? Patience, understanding and the importance of supporting young artists is often far more rewarding than anything I do with my work!

SP – Do you think social media a healthy and useful vehicle for photographers?

RD – Good question. I think overall, yes, social media has been positive for me. I have been lucky to gain a few big opportunities which have transpired because of Instagram. I have also made some meaningful connections with people. On the flip side it’s a constant job and can have a negative impact chasing likes, followers and opportunities. I try not to post anything at the weekend though to have a break!

SP – What do you always take with you when doing a day long shoot on Dartmoor, photographic and non photographic?

RD – Camera of course, I predominately work on Digital with a Nikon D850 and 3 prime lenses, 28, 35 and 50mm. Raincoat, waterproofs, change of socks, compass, GPS watch, food (lots of sugary snacks), water, and phone. Having been lost whilst doing the Ten Tors training I don’t underestimate the dangers of Dartmoor and always let people know where I am going and try to always have at least a rough idea of where I am on a map.