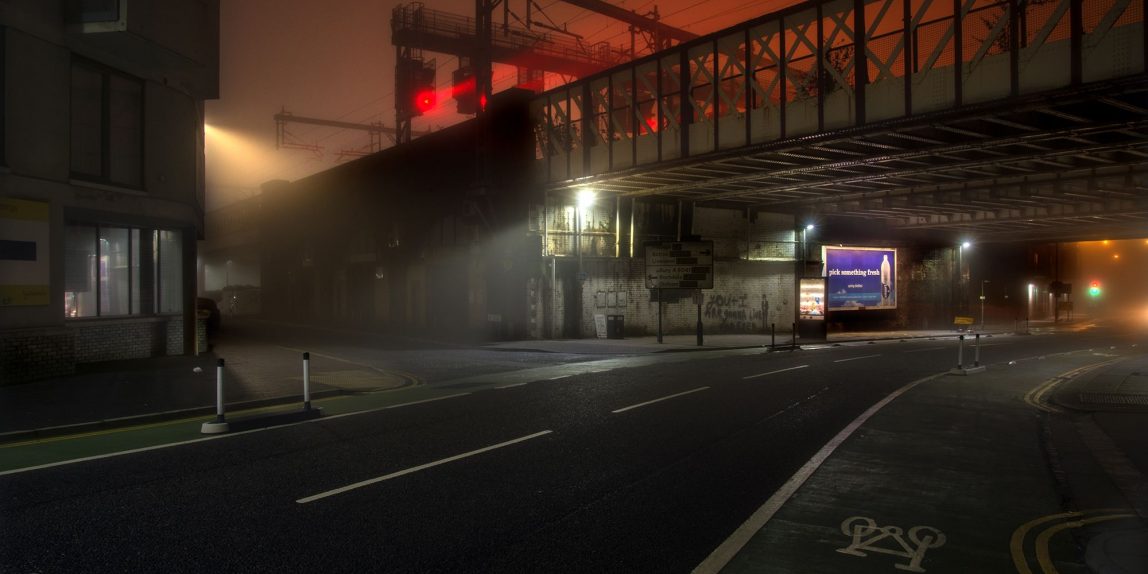 Simon Buckley is an internationally published artist based in Salford. Through his award winning “Not Quite Light” project, where he shoots in the half light of dawn and dusk, he explores themes of transition, heritage and regeneration in an urban setting. His work has been exhibited throughout Europe and the Far East.

In 2017 Simon began a series of visits to Dartmoor National Park.

The Dartmoor Collective’s Stephen Peart spoke to Simon about his experiences of visiting and photographing the moor.

SP: You describe your first visit to Dartmoor in 2017 as “ two weeks I will never fully understand”…

SB: I had come to Dartmoor to housesit for an old family friend, who I hadn’t seen for about 20 years.

Although he had lived in the north when I knew him as a child, when I walked into his house I was immediately taken back to my boyhood, as he had somehow managed to instil the same atmosphere within his current home. And that unnerved me straight away.

My friend’s house is in a hollow, and so I couldn’t see beyond the garden, which felt like a set from Disney, with its birds, foxes and badgers all gathered around the feeding boxes. A stream ran through the garden too, bringing a continuum of soft, rippling noise to my stay there.

I decided to switch off my computer for a few days and there was no phone reception, so I properly disconnected from the wider world. On the fourth or fifth day I awoke, pulled back the curtains just after daybreak, and the world had turned red. In addition there was a chaotic wind causing the trees to bend and roll. It was so very disconcerting.

It turned out it was the day when a hurricane had come in across Britain, and the red sand of the Sahara had also blown over. But when I first pulled back the curtains, as I hadn’t seen any news or forecasts, I felt the world might be ending.

That day I spent touring this strange land, entering woods where I felt deeply unwelcome amongst the pines, and feeling as removed as I ever have from my normal 21st century self.

And from them on, for the rest of that trip, I felt as if I was in a rural version of the Truman show and, for about 48hrs in the middle of my two weeks there, it caused me to feel really on edge mentally. I couldn’t sleep, I cried. A very odd few days in my life.

Someone said to me later, when I’d returned, that growing up in the North West we’re used to seeing distance, whereas on The Moor, I could see ‘no beyond’.

I’ve been twice since, and learned how to approach the Moor to protect myself from its strangeness, so it does make more sense. And maybe it’s just me…

SB: I wouldn’t be so presumptive as to suggest I bring a different perspective to the Moor. I just bring my perspective, respond to things as they occur to me. I see the place as magical, ancient, a land of portals. I feel very moved by its energy and disorienting layout.

But then I also see people who live and work on Dartmoor going about their lives, and they seem to behave like I do back on the streets of Salford, familiar with the surroundings, and seemingly untroubled by this sense of strangeness which I perceive here.

SP: At what point do you know that you have got a good image? For example, is it as you look through the viewfinder, when pressing the shutter button, or when processing the image? I guess I’m asking whether you have an instinctive emotional reaction to what you see or that there is a level of craft, or indeed both?

SB: I tend to see the picture before I place the camera to my eye. And when I press the shutter, I can already know what the finished, processed picture will look like. Some work out better than others, but most of the work is done before I take out the camera.

I conceive the picture, which is the emotional, intellectual element, I suppose to sound fancy, and then I use my craft to force this mechanical device, which has no soul or mind, to see the picture as I want it to.

I’ve no real love of cameras, they’ve always just been a means to an end for me. This may be why I also write, or do podcasts and performance. I sometimes feel trapped by photography.

SP: How have you / do you adapt your techniques when moving from very urban cityscapes to wilderness areas such as Dartmoor?

SB: It is different photographing in the open landscape. No streetlights and mixed lighting of course. Just the moon or rising sun. And dawn is slightly a state of mind. In the city the lights going out can be the signal for me that dawn is over. But in open land it ends when I feel it’s ended. I take a different approach with discerning the rhythm of a composition too. And sometimes, it feels absurd to try and photograph the wilderness.

A camera can subtract so much from the experience of being there, in that isolated state. I try to make my pictures feel like little stories, or film stills, inviting the viewer to put their own imagination in there. And that is the same whether I’m in Salford or the middle of a moor.

SP: Does time on Dartmoor or Scotland have an impact on the NQL projects? Does it alter your “eye” and perspectives?

SB: It certainly informs my emotional self, and that then feeds into my work. I often spend time not taking pictures when on The Moor, and use the time to consider my upcoming projects, or make sense of the ones I’ve got on the go already.

It’s an inspiring place, and that stays with me after I leave. I think what it does is remind me of the way in which we have planted cities on what was once wilderness. It causes me to consider the decisions we make about how, why and where we choose to build our larger urban conurbations.

SP: Your first trip to Dartmoor seems to have left you feeling disconcerted, slightly uncomfortable. Is that a negative or positive thing?

SB: I believe we learn the most from pain, and so, although for a few days I felt truly troubled by this ancient place, I see it as an entirely positive experience. I felt layers of urban stodge fall away from my mind, and believe it helped my work in the months following. It still informs me now, I think.

I think it’s essential, despite it being a cliché, that I feel unsettled, disconcerted to create my work. Contentment is lovely, obviously, but not very inspiring or motivating. Maybe my innate curiosity is driven by subconscious feelings of malcontent.

SP: What has been your worst experience on Dartmoor?

SB: My worst experience was also my best. That day I referred to, when I wondered if the world was about to end. It truly unhinged me for a day or two. I’ve got lost a few times when out walking, but I struggle to think of any experience which I would feel was bad.

I’ve mostly seen astonishing things, which beguile me. For instance, the last time I was down, in October of this year, I brought my partner with me, who had never been before. I’d told her about The Moor’s magic properties. We arrived late, at around 3am and, as I turned onto the Moor proper and drove towards Hexworthy a mist descended and two elegant white ponies appeared as if out of nowhere and trotted along the road in front of me for about a mile, silvered by the headlights. It was as if The Moor was sending her and us a message, letting us know we were in a different world.

The next night we went out at midnight in the full moon, on the road above Dartmeet. It was so bright and clear I could see divided fields miles in the distance. As we looked up a rare lunar halo formed, and a jet passed across the moon, its vapour trail actually casting a shadow against the sky. As we stood open mouthed at this beauty, another two horses, black this time, emerged from the shadows, whinnied and ran past us down the hill.

I could go on and on about the otherworldly moments I’ve had in my time on The Moor.

SP: Do you plan to spend more time on the Moor?

SB: Yes, without doubt. As long as Jam, the black cat lives, I will house sit. And even when his time has passed I intend to come back.

I’ve formed very strong bonds with The Moor, and will seek to maintain them. I’ve sat on rocks and closed my eyes, and sensed the deep ancient nature of the place. It’s an awakening for a city boy like me, and so why would I want to lose that connection?